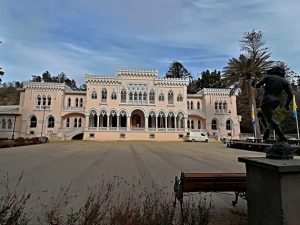 On August 16, 1906, Chile was isolated by an earthquake that marked the history of all the cities of the country. In this context, Mrs. Blanca Vergara de Errázuriz, daughter of José Francisco Vergara and heiress to the hacienda, entrusted the construction of the current Vergara Palace to the Italian architect Ettore Petri Santini, who also designed other imposing Creole mansions in the city. 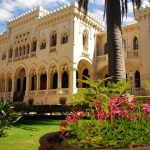 The Palace and the large park that surrounds it has the greatest heritage value in Viña del Mar, a city imagined and projected in that same place by Blanca Vergara’s father.

The Palace has elements of Gothic-Venetian style, which are reflected in its facades with pointed arches and balustrades. The total area of ​​the construction is approximately 2,646 m².

The interior rooms are decorated with sculptures, plaster moldings and fine parquet, the walls of the main room are lined with tapestries embroidered with gold and silk as well as the curtains. 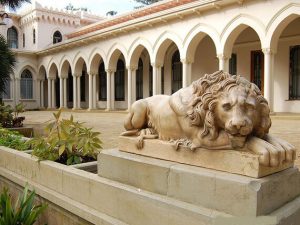 The park, of approximately 35 hectares, is unique for Viña del Mar. The landscape, set inserted in the urban fabric, has sculptures, busts, pools and paths along the park’s trails and the slopes of its hills.

In 1941 the Illustrious Municipality of Viña del Mar, acquired the Quinta and Palacio Vergara, plus part of the furniture and collection of European paintings, turning the park for  public use. The building houses  the Museum and School of Fine Arts. The Museum preserves and exhibits nearly 60 oil paintings from the Venetian school of the 16th century, the Spanish and Italian schools of the 17th century, and Impressionist paintings by the Spaniard Joaquín Sorolla. Meanwhile, the Chilean painting collection has been built up through purchases and donations from distinguished neighbors.